Certain apps and games arrive first in iOs and then Android. There are many top mobile apps and games that come to iOs first and then to Android. Market is been talking about the same. Android and iOs platforms vary in lots of cases.

Apple is known to be the biggest manufacturer of cell phones. Its own operating system known as iOS released in 2007 and Google purchased Android in 2008, once it started gaining popularity with its search engine.

We all know that Google’s mobile platform is the largest in the world when it comes to market share. However, there are certain apps for which Android users have to wait as these come first in iOS.

So, why this happens? What is the perfect reason about the same? What is the developers’ opinion in this? What do they believe? Is iOs development easier than android? There are tons of possibilities but actual reason is not known yet. 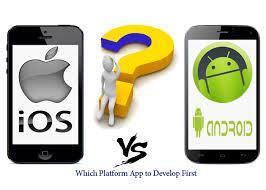 Our team is so enthusiastic and hence they thought to do some research for the same. Upon research, we found something amazing which we will discuss here:

Why some apps are available to iOS first?

In order to get the hold of things going on; questions were done to several web developers as to why their apps and games are available on iOs platform only and why certain games lead the iOS even if they are made for cross platforms.

Every answer was different. Many of them agreed that Java language is very difficult while on the other hand for iOS, X code is the ideal IDE that smoothens the workflow.

According to one developer; its target audience is mostly using iPhone and he prefers to make apps for those people only. When this question was put forward to the teens and 20 years old then for them; it is a symbol of social status and this places them at the top of their social circle.

Several youngsters buy android phones as its cheap and their goal is to purchase the iPhone within a year or two when they will be able to afford it. At present, they adjust themselves with the Android phone and now they are also adjusting with certain implementations of the apps.

Some of their friends have apps that don’t run on Android. The main target of developers is that audience who have strong buying power.

Further, developers have found that they get more profit in developing an iOs app as compared to that of Android. They are very well aware about the fact that if they monetize the app they will get good returns.

It is a huge factor for small developers who are just looking to make ends meet and if they need quick return on their investment then iOs is better.

Yes, Android has large number of users however it is the most fragmented OS. It is seen differently on different mobile devices as mobile manufacturers are free to modify the OS as per the hardware environment in their devices. All android apps don’t work on all android devices.

So, looking at these reasons; we can say that iOs is more rewarding as compared to Android and hence developers mostly prefer to develop apps for iOs.

Hope you got some good information from this blog post. For more such new updates and details, stay connected with Platinum SEO; a well known mobile app development company in Melbourne.