One of Biggest Google updates in 2014 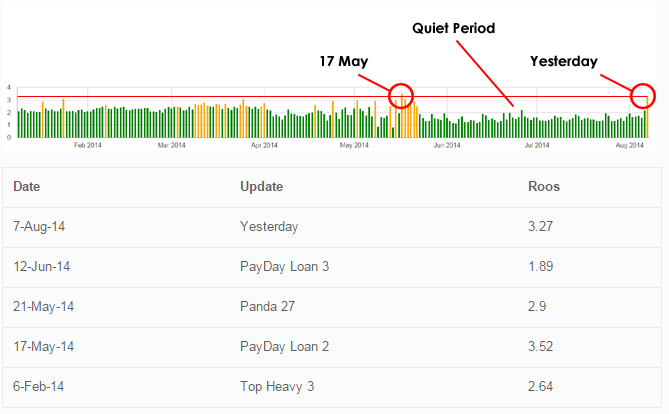 In this year 2014 after the jump of the scale on 17 may to a 3.52 roos, this is second biggest jump jumping on the 3.27 roos. Most interesting in this update is that this update maybe can have more reflection than last panda update for ranking of many websites.

Reviews by many engineers on the internet is telling us that maybe this is one of the most genuine and strong algorithm update by Google, for ranking websites. They are trying to make their top results to be sites with most trusted content.
Days after the jumping were highly violated, because SERP flux was ranging out from 2.8 roos to 3.14.

Many of the webmaster reactions were published by Barry Schwartz; he also shared many comparison of SEP flux in different tools. The graph icon that was posted by one of the Barry’s readers was most interesting, he believes that this was one of the biggest panda updates or refreshes.

If we back at the date when the website of this webmaster has a huge drop of traffic, and that is 10th January, and there is no record of any official Google updates in their algorithm.

These SERP changing are made many times in the year. You can see how it is look in the next picture:

The first biggest change came after their update (penguin 4), and that was on 23th may 2013, another change was on the 10th January this year, next one was one 4th April, and finally the last happened on the anniversary of penguin’s update with panda, and that was on 27th may this year. So there is possibility that this current links are from January event, but we are not sure, and we don’t have enough cases to make conclusions on this problematic.

Many of the biggest Google updates made problems to many webmasters and web owners, because their rank dropped down fast because of their spam and poor backlinks. For someone these updates are good but for others are bad. That webmaster who are made websites only for commercial using, as an advertising using Google Ad Sense, are making bad backlinks, and before first Google updates their websites rankings were amazing, so they were making a lot of money from this Google omission. After every update their website rankings were on the lower ranking than before.

With their last update, Google almost and is not permitting some websites to be ranked, if they don’t have quality, unique and trusted content. In the Google eyes one of the main reasons to get better ranking on their search engine is to have quality content and to get natural back links, and then you will for sure have your websites in top Google ranks.

To know more about Google updates and how they can improve your rankings in the search results, you can get in touch with one of the well-known names among the SEO services providers in Perth -Platinum SEO, .