An effective way of communication in today’s era is social media. In recent years, it has achieved significant growth. It has now become the most preferable method of communication as well as entertainment.

Today, in this blog post from SEO Company Perth, Platinum SEO; we will list some of the social media facts of 2015 which will be very useful in developing an amazing social media strategy in the coming year.

We all know that the usage of digital devices has increased to an extent. Nearly 46% of consumers with a digital device make use of social media for informed purchases. Among the widely used social media networks, the top three are LinkedIn, Twitter and Facebook.

Out of these three, LinkedIn is completely a professional network whereas Twitter is used for both business and personal use while as Facebook is used to stay connected with people around you. Around 60% of marketers say that LinkedIn is very useful and 50% feel the same for Twitter.

While only 30% of business owners consider Facebook as an effective tool for promoting their products and brands or we can say do advertisements. Online marketing can be carried out very effectively with the help of these social media networks.

Among the three, Twitter is considered to be the highest performing online social media platform because brands can get lots of followers. Yes, not for every business this is useful but for those who use it to market their products and services can see its effectiveness.

Online marketers are 400% likely to follow brands on Twitter and if any product is posted on Twitter then 150% more people are likely to buy it just by viewing its tweets. If we look at the audience using social media networks then majority of them are women showing 71% usage rate as compared to that of men with only 62% usage rate. 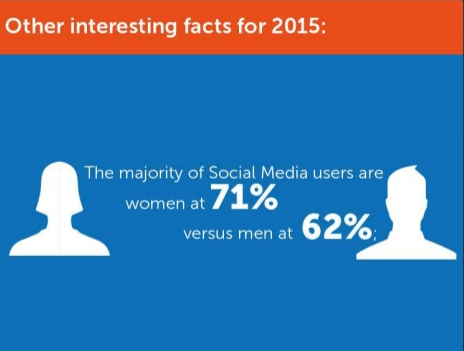 So, keeping in mind all these information; we have gathered some of the factors which help you to have a deep insight on the social media networks and how it had been in 2015. These facts will help you to develop a perfect digital marketing strategy that can boost your business.

Several tests have been conducted to check whether social media helps to boost rankings on Google or not and every test has given negative results. This means Social media and Google are not interrelated.

You can also get in touch with our experts if you wish to get result oriented online marketing strategy developed for your business.